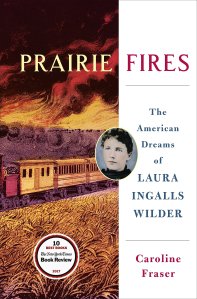 I was first introduced to the Little House books by Laura Ingalls Wilder when I was in grade school, and the books immediately became my favorite books, dearly loved.  I read the series over and over (and still have that original boxed set I got when I was eight years old), and like many girls at that time, dreamed of being Laura Ingalls.  I had intricate fantasies of growing up and leaving civilization and escaping to the frontier (believing it still existed), wearing old-fashioned long skirts, and living blissfully in a log cabin on the prairie.  I would change my identity and be Laura Ingalls.  That was my idea, at my tender, naive age, of the perfect, happy life. 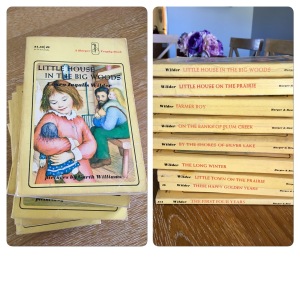 Laura Ingalls Wilder the author was conflated in my mind for many years with the Laura of the Little House books, and so the author became a hero to me not only for being an author (because most authors were always heroes to me) but for having lived this wonderful pioneer-girl life.  It wasn’t until many, many years later – well into adulthood – that I began to discover that although the real Laura Ingalls’s life had provided the framework for those Little House books, the stories in the books were embellished and fictionalized.

Still, Laura Ingalls Wilder has remained larger than life to me.  My fascination and even reverence for her hasn’t diminished.  I read a biography about her several years ago which opened my eyes to many facts I never knew, like the fact that she had a baby boy that died, that she had an often contentious relationship with her daughter, Rose, and that the authorship of the Little House books has long been held in question.  Although some of this news was a bit deflating, it all made Laura seem even more human and real to me, and so my fascination has not abated.

So when Prairie Fires was published, I was eager to read it.

At 640 pages, Prairie Fires is a hefty read, but it’s never boring or dry.  Exhaustively researched, the book covers the entire chronology of Laura’s life, beginning before she was born, with her parents’ backgrounds and marriage.  Always on the move chasing prosperity that was always out of his grasp, Charles Ingalls never succeeded as a farmer or a businessman, and often could not provide for his family.  The family skipped town to escape debt, took in boarders (some of them shady), and sent their young daughter to work to help support the family.  They often went hungry.

The book also delves into the social impact of the Homesteader’s Act, which allowed (white) people to claim land at the tragic expense of Native Americans.  The Ingalls family was a part of this and Charles Ingalls, in fact, was a squatter.

Despite this, the family was close and loving and found contentment in their humble existence.  Laura idolized her parents – especially her father.  The scene depicting the young married Laura saying goodbye to her family as she and Almanzo prepare to leave South Dakota for Missouri is heartwrenching.

Laura and Almanzo’s marriage endured for over sixty years, through the accumulation of debt that put them on the edge of ruin, through the death of their second child and only son, through severe illness, failed crops, house fires, and multiple moves.  Through all of it, they retained a genuine affection and loyalty to one another.

As much as this book is a biography of Laura Ingalls Wilder, it’s also a biography of her daughter, Rose Wilder Lane – a volatile, unstable, and frankly, unlikeable woman.  She reminded me of my own mother – a toxic personality, jealous, self-centered, and manipulative.  She and Laura seem to have had a very unhealthy, co-dependent relationship, and their working relationship with regard to the writing, editing, and publishing of the Little House books is covered in detail.

As it turns out, Laura Ingalls Wilder was very human and very flawed.  She was a woman of contradictions, openly criticizing federal social safety programs and portraying her family as models of self-sufficiency and independence while failing to acknowledge the federal help both Charles Ingalls and she and Almanzo received by way of the Homestead Act and federal loan programs.  She had a hot temper and could have a sharp tongue, and her role as a mother seems to be the one role that she never filled confidently, despite her own loving upbringing.

When all was said and done, I still cried when Laura’s life reached its end.  I don’t really know why she retains this hold on me – whether it’s some pull of nostalgia for my own innocence as a child, or whether on some level I still see her life as portrayed in the Little House books as an ideal – but she hasn’t fallen from her pedestal in my mind.

Prairie Fires is an excellent book, and a must-read for any Laura Ingalls Wilder fan.