For some reason I’m not sure of, I’m drawn to novels set in Ireland or containing Irish characters.  That really was the only reason I bought this book on one of my browsing forays at Barnes & Noble; I didn’t even know that there is now a film out based on this novel.

Set in post WWII Ireland and New York, this is the story of young (twentyish?  Her age is never specified) Eilis Lacey, the youngest of a passel of children in a family whose home is Enniscorthy, Ireland.  The brothers have all left home, the father has died, and Eilis lives with her older, glamorous sister, Rose, and their aging mother.  Somehow it is decided between Rose and Mrs. Lacey that Eilis will move to America; they foresee opportunities for her there that are probably not possible in her small hometown.  The arrangements are all made without anybody ever asking Eilis how she feels about it, but being the compliant, people-pleasing young woman she is, she makes no protest, and off to New York she goes.  Once settled in a boarding house for women in Brooklyn, and after a brief bout of severe homesickness, Eilis begins to find her way in her new surroundings.

Of course she meets a young man – that comes as no surprise.  Their relationship moves rather quickly, and when Eilis receives tragic news from back home in Ireland, Tony convinces her to make an impulsive decision that will have lasting consequences.

Eilis travels back in Ireland to tend to her family in the wake of their loss, intending to stay for a month and then return to Brooklyn and to Tony, but she soon finds comfort in the familiarity of home and in the arms of another man.

I enjoyed this novel, although it didn’t dazzle me.  I actually found the first half or so rather sedate, if pleasantly readable.  Things don’t really pick up until Eilis goes back to Ireland, and what ensues then left me cringing, muttering, “Oh no … this can’t end well …”  On some level, though, you almost can’t blame Eilis for what happens; it all seems somewhat out of her control – her move to Brooklyn was decided and arranged without her input, and the relationship with Jim Farrell once back in Ireland is something that was, to some degree, orchestrated behind her back.  Eilis is in some ways a bit of flotsam, swept this way and that by a current beyond her control.

In the end, the reader is left to figure out for themselves how things work out; I appreciate that sort of ending.

Brooklyn is a nice little novel; I’ll probably see the film if only because it looks like a beautifully done period piece. 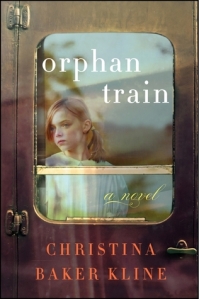 I agreed to read and review this book for TLC Book Tours, and wow, what a book.

In England, it was the workhouse – a chapter in the history of the country’s social welfare system wherein the government tried to deal with its destitute and homeless population.  Here in the US, it was orphan trains – a mere footnote in our history.  In both cases, we can look back from our enlightened and modern perspective and see those early efforts as cruel and monstrous, but the truth is, at the time, those methods of dealing with orphans made sense.

In Christina Baker Kline’s Orphan Train, we meet Vivian, a ninety-one year old woman who has agreed to have Molly, a seventeen year-old foster kid on the verge of landing herself in juvie, fulfill her sentence of community service by having her help clean out her attic.  Cleaning out Vivian’s attic, however, becomes merely a way for Vivian to revisit her past one last time, and perhaps make peace with it, finally.

Over eighty years prior, Vivian was a girl named Niamh (pronounced “NEE-uhv”), recently emigrated to New York from a small coastal town in Ireland.  At the tender age of nine, Niamh loses

her family in a fire and is left orphaned.  Some neighbors turn her over to the Children’s Aid Society and she is placed on a train with hundreds of other orphans, bound for the midwest where they will be paraded before townspeople in the hopes of securing new homes.  Not surprisingly, babies are in highest demand – and they are the most likely to actually be taken into families who want a child to love and raise.  Older children, more often, than not, are taken in by people – if they are taken at all – who are looking for free labor.  It is a frightening reality that the children go to anyone willing to take them, with no background checks, interviews or investigations undertaken – they are turned over to strangers in exchange for some signatures on a few forms.  Not surprisingly, they often entered lives of torment, abuse, neglect, and despair.

Niamh – later Beverly, and later still, Vivian (one of the most heartbreaking aspects to me was the fact that most of the children were given new names by the people taking them in; in addition to losing their blood families, they have their very identities stripped from them) – suffers great hardship and loss in her new life.

Now nearing the end of her life, she undertakes the cleaning out of her attic, and old ghosts are resurrected.  Over the weeks that Vivian and Molly work together in the dusty old attic, Vivian shares her story, which turns out to be not so different from Molly’s own story of being bounced around from foster home to foster home.  Despite the seventy years that separate Vivian and Molly in age, a friendship is forged through shared experiences and the recognition of a kindred spirit in each other.

This book really packs a punch, and by the end, I was crying big, sloppy tears.  Wonderful story.