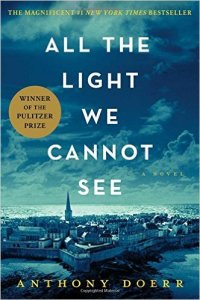 All the Light We Cannot See

Truth be told, I only read this book because I saw somewhere that President Obama had it on his summer reading list last year.  Although I was aware of the book before discovering that fact, I probably wouldn’t have picked it up otherwise, only because I’ve read so many books set during WWII that they don’t especially appeal to me at this point.  I’m glad I decided to read this one.

The story centers around a young blind girl named Marie-Laure who lives with her devoted father, a locksmith for the Museum of Natural History in Paris.  When Marie-Laure, motherless, loses her sight at a young age, her father goes to great lengths to ensure his daughter’s ability to navigate her world, spending years painstakingly crafting a miniature wooden replica of their neighborhood so that Marie-Laure could memorize its characteristics by touch and translate that to an understanding of the life-size reality of the landscape.

When France is invaded by Germany, Marie-Laure and her father flee to a seaside village and take refuge in the house of an eccentric and reclusive uncle.  The uncle, suffering all these years from PTSD from fighting in WWI, has not left his house in twenty years.  In this tall house in Saint-Malo, Marie-Laure’s father again undertakes the building of a model of the village in order that his daughter may be able to navigate it if the need arises.  Soon, Marie-Laure’s father leaves her with her uncle when he is summoned back to the museum, ostensibly to return a highly prized, rare, and valuable gemstone that he spirited out of Paris when the city was invaded.

Running parallel to Marie-Laure’s story is Werner Pfennig’s, a young German orphan boy with an affinity and aptitude for radios, which eventually earns him the attention of influential Nazis.  As a teen, rather than being sent to work in the coal mines like so many of his peers, Werner is sent to a prestigious boarding school for boys, which is his induction into the Hitler Youth.  Werner struggles continually with what he witnesses and takes part in, both willingly and by force.

Eventually, Marie-Laure’s and Werner’s stories collide in a way that is unexpected.

I began this story feeling a little ho-hum about it, but was quickly taken in.  It’s beautifully told, and full of characters and settings so vivid that I felt as if I were a bystander, watching it all unfold.  Weeks after finishing this book, I am still pondering it.