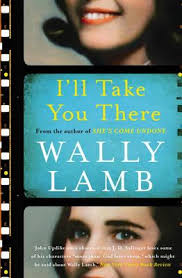 I’ll Take You There

When I was asked to read and review Wally Lamb’s latest novel by TLC Book Tours, I eagerly said yes.  I’ve been a fan of Wally Lamb for many years – ever since I read She’s Come Undone, which remains one of my favorite novels.

I’ll Take You There centers around Felix Funicello, an aging but pretty hip film professor who runs a Monday night film club for local film buffs at an old movie theater.  One night while he’s alone at the theater he’s visited by an apparition, which turns out to be the ghost of Lois Weber, a groundbreaking female film director who has been dead for decades.  After a gossipy conversation with Felix (who strangely doesn’t freak out over being visited by a ghost, but pretty much rolls with it), Lois points him to a stack of film reels and instructs him to watch them.  The films are footage from Felix’s life.  Some of them he remains an observer, and some he actually enters and relives.  Through these films, Felix acquires insight into various women who have impacted his life through the years: his mother, his older sisters – one of whose adolescent breakdowns changed the course of the entire family – and his grown daughter.  While Felix repeatedly asks Lois why he’s been chosen for this adventure, she only says that he’s “educable,” leaving the impression that Felix is in need of sensitivity training concerning women.  This was just one unsatisfying aspect of the story, as Felix is clearly already a pretty feminist dude.  It would sort of be like the ghosts of Christmas Past, Present, and Future visiting Santa Claus instead of Ebenezer Scrooge.

Revisiting the past in order to understand the present certainly isn’t a unique premise, and neither is time travel or even ghosts.  Wally Lamb has a certain gift for understanding and writing about women, and that does come through in this novel.  However, the underlying themes of feminism and family dysfunction are treated lightly, the characters are rather cliche and one-dimensional, the conflicts too easily resolved, and the plot feels contrived.  I didn’t hate this book, but I didn’t love it.  Nothing earth-moving, but a decent beach read.

One thought on “I’ll Take You There by Wally Lamb”