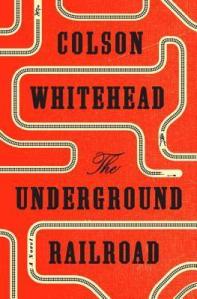 Among the myriad of novels depicting American slavery, this one stands out mainly because it imagines the so-called Underground Railroad as an actual underground railroad bearing slaves to freedom, rather than just a figure of speech referring to the secret network of black and white people offering haven and help to slaves attempting to escape bondage.

The protagonist in this story is Cora, a young black woman – really a mere teenager – owned by one of the most brutal slaveowners in Georgia.  The depictions of the horrors inflicted upon the slaves of this particular plantation are difficult to stomach, so creative in their brutality are they.  Cora is deemed a “stray” by her fellow slaves, having been left behind by her mother who managed to escape in the dark of night (and whom Cora holds a deep and abiding anger and resentment) before she reaches adolescence.  Having nobody to look after her, and being duly abused by fellow slave men almost as soon as she enters puberty, Cora becomes withdrawn and fierce.  When an opportunity to escape bondage presents itself, Cora hesitantly takes it, despite a recent escapee having been captured, brought back, slowly tortured and roasted alive for the entire plantation to watch in horror as penance.

And so we are introduced to the Underground Railroad, a literal thing rather than a figurative one.  Miles upon miles of tunnels dug and tracks laid by black people deep under the ground, with “stations” hidden under barn floors and kitchen floors across the South, and with both black and white people risking everything (and many losing everything, including their lives, in horrible ways) to bear slaves to freedom.  Nevermind that if there were railroads running underground, the ground would likely shake, or at least vibrate, making it unlikely to be kept secret, and nevermind questions about where the trains came from and how anyone managed to get them into these underground tunnels – reading this story does require a little suspension of disbelief.

Trouble follows Cora on her journey to liberty from the very beginning, and it is with suspense that the reader follows Cora, feeling hope and despair by turns.  The question always remains: can any black person truly escape the chains of bondage?

Well worth the read.