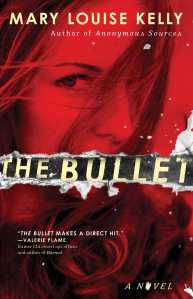 I really, really wanted to like this book.  It has a great premise: the protagonist, Caroline, discovers quite by accident when she is in her middle thirties that she has a bullet lodged in her neck.  No apparent scar to indicate an entrance route, absolutely no memories of how the bullet got there.  So, we’re set up for a good crime mystery.

And it is an interesting story: it turns out that Caroline was adopted at the tender age of three, shortly after her birth parents were murdered in cold blood.  Tiny Caroline was the only witness, and also a victim of the shooting – left for dead.  She survived, however, was adopted into a loving family, and never told about her terrible past, or even that she had been adopted.

Upon discovering all of this, the adult Caroline sets out to find out who killed her birth parents, as the murder has remained unsolved for thirty-four years.

Right away, though, I had trouble even liking Caroline.  From start to finish, the author makes way too much of Caroline’s looks – she’s so beautiful, she’s so attractive, she’s so sexy, blah blah blah.  And since the story is narrated by Caroline herself, she just comes off as rather narcissistic and overly vain.  Then there’s the matter of her adoptive family – a WASPy, homogenous, country-club set if there ever was one.  I don’t know – it just made them seem … cardboard and one-dimensional.  Caroline also has an almost unnaturally close relationship with her adoptive parents (whom, of course, she doesn’t know are her adoptive parents until now) – to the point of annoyance.  Everyone in the family, including her two older (adoptive) brothers, absolutely dotes on her.  Her brothers actually address her as “Sis.” (Nobody does that in real life, do they?)  The way she is babied by her family, and the way she basks in it, is so incongruous with the image of her as this mature, independent, brilliant, accomplished woman.

Oh yeah, and I can’t leave out her personal doctor who (of course) falls in love with her and who (of course) shows his love by stalking her, whose romantic advances are (of course) welcomed by our heroine (cough, cough) and who (of course) turns out to be married.  Blah.  Why must we be so hung up on the love-interest angle?  This story would have been much better without this element.

Then there is the matter of how the story unfolds once Caroline decides to take it upon herself to solve the murder of her birth parents.  In a word: implausible.

Eh.  A very middle of the road novel.  An easy, and even entertaining read, provided your expectations aren’t too high.

One thought on “The Bullet by Mary Louise Kelly”