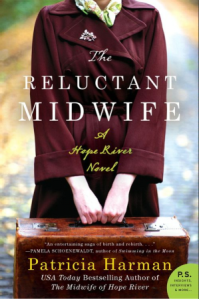 I was really looking forward to reading this follow-up to Harman’s The Midwife of Hope River, which I thoroughly enjoyed.  Sadly, The Reluctant Midwife proved to be a disappointment.

This latest novel has Nurse Becky Meyers in the starring role; she was a minor character in the first novel.  It’s 1934 and America is in the throes of the Great Depression, and Becky has unwittingly become the sole caretaker of her boss, Dr. Isaac Blum, who has fallen into a mysterious, near-catatonic state.  Out of money, owing back rent at a boardinghouse, the two hightail it out of town in the middle of the night and head back to Hope River, where Dr. Blum still owns a house.  However, when they arrive, Becky discovers that the doctor’s property was sold to pay back taxes.  Having nowhere to go, she takes Dr. Blum to the midwife Patience Murphy’s house, which they find vacant, and soon learn that the midwife married the town’s veterinarian and now lives at his house.

Almost everyone is out of work, and Becky’s search for a job is difficult.  She works for a short time delivering groceries, and then finds work as a nurse at a CCC camp.  Meanwhile, she also assists Patience Murphy at births, although midwifery is not what she would prefer to do – hence the title of the book.

I wish the characters had been more well-developed.  I wish the dialogue didn’t contain so many exclamation marks! as their proliferation took away from what could have been a more serious story, I felt.  There are some good birth scenes, but a lot of the drama in the story tipped into melodrama.  Unfortunately, the editing is also shoddy, as there are typos throughout the story.  Probably my number one complaint, though, is the character of Dr. Blum.  I think the story would be much improved by the elimination of his entire character.  I just could not take him seriously at all – a man who supposedly falls into a catatonic state in response to the deaths of two people (his wife, who was a total bitch, and her lover), so disabled is he, apparently, that he loses the power of speech, he drools, “poops in his pants,” has to be hand-fed, and helped with his toileting.  But then it turns out he’s (sort of) faking it!  And then he and Becky fall in love, and … blah blah blah.  I just couldn’t buy it, and frankly found it a little repugnant.

It’s been a couple of years since I read The Midwife of Hope River, and I no longer have the book so I can’t go back and skim through it, but I seem to remember the characters and the storyline just being a lot more believable.  The characters populating this latest novel seem more like caricatures, and not real people to be taken very seriously.  Thus, it was also difficult to become invested in any of them.

If you’re looking for an okay, light read, this’ll do.