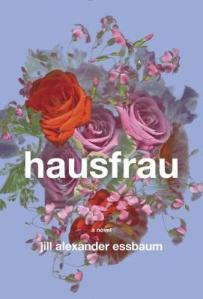 Anna is a thirty-seven year old American expatriate who has lived in Switzerland for the past nine years.  She is married to a Swiss banker and is the mother of three young children.  After nine years in Switzerland, Anna barely speaks the language, nor does she drive, and relies mostly on the train system to get around.  And get around, she does.

Anna is the quintessential bored and lonely housewife.  I wanted to sympathize with her – and did in some ways – but found it difficult because she brings a lot of her suffering on herself.  Bruno, her husband, is weary of Anna’s “fucking misery,” and urges her to seek therapy and take a German language class.  Maybe if she finally learns the local language, she won’t feel so isolated.  Therapy doesn’t help her all that much – mostly because she withholds so much information from her therapist.  In German class, she immediately meets a man and throws herself into an affair.  It’s not her first.  In fact, her daughter, not quite a year old, is the product of an affair – but only Anna knows this.  She also makes a girlfriend in German class – another housewife, this one transplanted from Canada.  Mary is almost Anna’s opposite, though – sweet, squeaky clean, eager to help, naive and innocent in many ways (although there are some scenes that unfold that leave the reader wondering if Mary isn’t, in fact, a conniving, malicious bitch disguising herself as a sweet housewife …).  Anna has difficulty accepting Mary’s friendship – part of the frustration with Anna’s character is her seeming unwillingness to help herself.

Essbaum is an award-winning poet and writer, and her ability to weave a mesmerizing story is undeniable.  This is a taut, sexually charged and psychologically intense story with parallels to Tolstoy’s Anna Karenina.  There is a lot of suspense in wondering how far Anna will take things, and if she will get caught.  The end, while almost inevitable, is stunning.