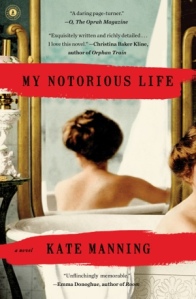 My Notorious Life: A Novel

I was intrigued by this book, as it promised to be another novel that delves into midwifery, a favorite topic of mine.  As it turns out, though, this historical fiction is about much more than midwifery in the nineteenth century.  At its heart, this story has a feminist thread running through it, and it’s very much about how women and their rights and bodies have historically been under the rule and at the mercy of men.

The story opens with twelve-year old Axie Muldoon, her younger sister and baby brother huddled on a street corner in the slums of mid-nineteenth century New York.  The children of Irish immigrants, their father has recently died and their mother has been badly injured in a work accident, leaving the family penniless and near starving.  A man from the Children’s Aid Society happens upon the children, and in short order they are shepherded onto an orphan train bound for the midwest, with promises of a better life.  Dutchie and baby Joe, Axie’s young siblings, are soon adopted, much to Axie’s deep grief; through a string of circumstances, Axie ends up back in New York, where she finds her mother, now an amputee, remarried and pregnant.  Her mother soon dies from complications from childbirth, and now Axie is truly an orphan.  She is taken in by the midwife who tried but was unable to save her mother’s life, and Axie soon becomes apprentice to this “female physician.”  Eventually, Axie learns that Mrs. Evans’s practice is not limited to delivering babies; she also prescribes “conception preventatives” and performs abortions.

The story spans many years, and running parallel to the story of Axie’s humble beginnings and rise to notoriety as “Madame Debeausacq” is a love story – that of Axie and a boy she met on the orphan train who later becomes her husband.

When Axie and Charlie marry, Mrs. Evans has died, leaving Axie unemployed, and Charlie’s wages are a printer barely keep them fed.  Axie begins preparing and selling medicines for female complaints, and soon she and Charlie are making money hand over fist.  That their abortive medicines – meant to “clear obstructions” in ladies – are in such high demand is telling.  Women of that time had little control over their own reproductive destinies and very often kept producing children until it killed them, or until they had too many mouths to feed.  Children and families were starving and impoverished, orphanages were overflowing, and women very often had nowhere to turn.  Madame Debeausacq was an angel of mercy with her medicines and, soon, operations to clear female obstructions.

Loosely based on the real Ann Trow Lohman aka Madame Restell (fascinating stuff!), this story forces us to examine our ideas of morality and how far into people’s – especially women’s, since women have always been very much the victims of a patriarchal society – reproductive lives the law should reach, while illustrating the hypocrisy that still exists of decrying abortion, and in some cases even contraception, as immoral or even criminal (and certainly “sinful”) while refusing to develop a societal framework in which all women and children have access to the basic necessities to be able to live healthy, meaningful lives.

The subject matter is probably not everyone’s cup of tea, but I enjoyed it immensely.