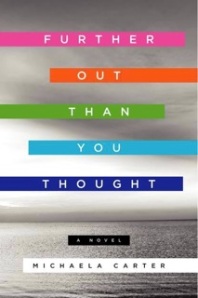 Further Out Than You Thought: A Novel

The Century Lounge was warm and red, like a womb.  The walls were red, and the curtains — everywhere there were curtains — between the main stage and the backstage, between the private dance booths and the showroom — red velvet curtains.  Day and night were a constant gloaming, and always the room smelled of perfume, of sweat, of pussy and cigarettes.  The red and lilac lights lining the main stage sent rays through the smoke as the dancers walked the room with their lit cigarettes, as the leaned toward the ears of the men, also smoking, or eating a burger and fries, but watching, all eyes, as the girls, in passing, whispered, ‘Wanna peek, up close, twenty bucks,’ the chiffon and black lace like forgotten wings waving behind them.”

So opens Further Out Than You Thought, Michaela Carter’s debut novel about a twenty-something girl named Gwen who assumes the persona of “Stevie” and dresses up in little girl dresses, ruffled socks, and Mary-Janes, and dances in a strip club in Los Angeles to pay for graduate school.  Gwen is a poet who is haunted by her mother’s death in a car accident years before, who has an eating disorder in her past, and who finally ran away from a father who was married to his law practice.  Gwen was only going to strip for a year – and she had rules that would prevent her professional life from intruding into her personal life – but here she is, five years later, still taking her clothes off for money, and the hard and fast lines between her onstage and offstage lives have become increasingly blurred.  Gwen lives in a cockroach infested apartment with her deadbeat, pothead boyfriend, Leo.  Upstairs lives their best friend, “The Count,” a man who is in love with Leo and who is dying of AIDS.  Suddenly, Gwen finds herself at a crossroads: she is pregnant with Leo’s baby.  For days she agonizes about whether to keep the baby and whether to tell Leo.

Set against the backdrop of the L.A. riots following the Rodney King trial in 1992, the story is a little haunting, a little trippy, and a little erotic.  The reader is treated to front row seats to a strip club, and backstage passes, as well as a view into the heart and mind of one particular young woman who has her whole life ahead of her, but is floundering.  Does she have what it takes to be a mother?  Does she even want to be a mother?  Can Leo pull his head out of his ass and learn to be a responsible adult and a father?  These are the questions Gwen grapples with.

I was interested in reviewing this book for TLC Book Tours mainly because I’m a Southern California native myself and well remember the Rodney King trial and the L.A. riots.  I remember the glowing horizon off in the distance that could be seen from our balcony thirty miles away, the ash floating in the air, and the images on the news of looting and fire and violence.

A well-told story; worth the read.

2 thoughts on “Further Out Than You Thought by Michaela Carter”