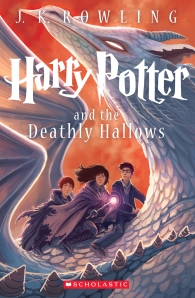 You’ll have to excuse me; I’m in mourning.  You see, I finished the final installment of the Harry Potter series last night.  With tissues in hand and tears streaming down my face, I turned the final page.

In this, the seventh installment, Harry and company are seventeen and should be entering their final year at Hogwarts School of Wizardry and Witchcraft.  But there will be no seventh year at Hogwarts, because the wizarding world is at war with Voldemort and his Death Eaters.  The Ministry of Magic has been infiltrated and taken over by the Dark Lord’s soldiers, and Harry is on the run – frantically trying to fulfill the mission left to him by Dumbledore, after a surprisingly somewhat touching parting with the Dursleys.  All Harry has left in the world is what he has learned at Hogwarts and through his own trial and error, ingenuity, and perseverance – and the love and loyalty of his friends.  Is it enough to see him through to a victorious end?  Well, I won’t give it away.  I will say that, with six books behind me, I couldn’t imagine any more twists or turns to Harry’s odyssey, but I was left with my jaw hanging once again.  The final battle scene is intense, and although in the end, the story wraps up neatly, I felt a little emotionally drained – in a good way.

I am left with a number of questions, which, I’m sure, either don’t have answers, or whose answers probably could be found with a little digging:

I also have to say that with everything Harry went through – with all the terrible losses he sustained, the torture and injuries, there is just no way he wouldn’t be completely and utterly tweaked, am I right?  But I know, it’s just a kid’s story, and we prefer our heroes resilient and well-balanced.  Also, after seven years of high adventure and danger, I don’t think there is any way Harry Potter could have gone on to live a sedate, steady life with a wife and kids.  I can’t picture it.  At the very least, he would have become Minister of Magic . . . or Headmaster of Hogwarts.

But we, the readers, are left to imagine Harry’s future for ourselves, I suppose.

In any case, I grew far more attached to the characters populating these books than I ever imagined possible – and I truly loved the adventures and the story from beginning to end.  I am serious when I say that I feel a sense of loss to have finished the series; it feels like saying goodbye to old friends.  Part of me wants to take up the first book again, just to bring it all back.

2 thoughts on “Harry Potter and the Deathly Hallows by J.K. Rowling”