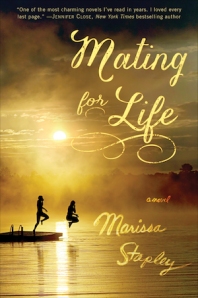 Mating for Life: A Novel

I received an advance copy of this novel, slated to be released this summer, from bookbrowse.com.

Set in Canada, at the heart of the story are four women: Helen and her three daughters, Fiona, Ilsa, and Liane, each fathered by a different man.

Helen is an aging former folksinger who became well-known not only for her music, but for her insistence that she didn’t need any man.  She has moved in and out of relationships throughout her life seemingly as cavalierly as playground relationships.  Now that she is in her sunset years, she finds herself suddenly grappling with a longing for a more permanent companion.

Fiona, Helen’s oldest daughter, projects the image of the perfect mother and wife, living the perfect life.  It’s a brittle facade, however.  Behind closed doors, everything is as far from perfect as she can imagine, and when her husband reveals a long-kept secret, Fiona’s world crumbles.

Ilsa is the beautiful middle daughter.  Married to a “staid” older man and the mother of two young children, Ilsa feels restless and suffocated by her life, and enters into a dangerous liaison that can only bring heartache.

Liane is the youngest of Helen’s daughters and unhappily engaged when a handsome writer enters her life.  Soon she breaks off her engagement and jumps headfirst into a new relationship, trying to navigate her role as girlfriend and “step-something” to his two daughters.

This novel is about couplings and uncouplings, and really doesn’t cover anything new.  Each chapter opens with a description of a different animal’s mating habits, and that animal then makes a cameo appearance somewhere in the chapter.  The story is told in alternating voices, but because it’s told not only in the voices of Helen and her three daughters, but also several other supporting characters, I felt that there were a few too many voices, and the story became a bit muddled.

Still, the writing is good, and it’s an enjoyable story, even if it’s forgettable and not deep or profound (although I think it tries to be?).  Chick-lit; good, light, beach reading.

2 thoughts on “Mating For Life by Marissa Stapley”