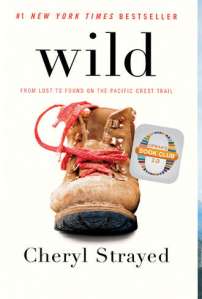 Wild: From Lost to Found on the Pacific Crest Trail (Vintage)

In 1994 at the age of 26, Cheryl Strayed set out to hike a portion of the Pacific Crest Trail.  In its entirety, the PCT runs from Mexico to Canada, spanning over 2,600 miles.  Strayed’s goal was to hike the trail beginning in the Mojave Desert of California up to Portland, Oregon.  What brought this young woman to the trail was a series of events in her life that left her shattered and floundering: the sudden death of her mother to cancer, a failed marriage, the scattering of the only family she knew, a

descent into heroin use, an unwanted pregnancy.  With little left to lose, Strayed decided that she might be able to heal herself – or die trying – by undertaking the punishing long distance hike.

Unlike most PCT hikers at the time, Strayed decided to hike alone, and unlike most PCT hikers, she had no backpacking experience.   Most people who set out to conquer the PCT train for it for months ahead of time – but not Strayed.  Both cocky and naive, she spent months scrimping her waitress wages to buy the tools and equipment she decided she would need for her journey, but she never actually trained for it.  When she began her hike on the PCT, it was with a ludicrously over-packed backpack that she could barely lift off the ground and a pair of ill-fitting hiking boots that would nearly destroy her feet.

In the end, Strayed hikes over 1,100 miles of the PCT, bypassing most of the Sierras because of a record snow fall that year.  Along the way, she becomes a smarter hiker, shedding the excess baggage in her backpack, affectionately named “Monster.”  She crosses paths with people who impact her in ways she never expected, she finds herself in dangerous situations, and she finds solace in solitude.  As she hikes and sweats and bleeds, she discovers that she will survive – not just the PCT, but her grief, and her life.

I have to confess that when she started on the PCT, and through the first leg of her journey, I felt frustrated with her – she was foolish and reckless, I thought.  But as she grew wiser over the three months she hiked, I grew to admire her more and more, and I found myself wishing that I had that kind of moxie – to just do something big like that and not let fear stand in the way.  When she reached her destination, The Bridge of the Gods, and her hike was over, I felt a loss in seeing her journey come to an end.

I loved this book.  Beautifully told with humor and courage, I could picture so many of the scenes and was deeply moved as Strayed went back and forth in time between hiking on the trail, and recalling events of her life that led her to this point.

You can read more about Cheryl Strayed here.

3 thoughts on “Wild: From Lost to Found on the Pacific Crest Trail by Cheryl Strayed”