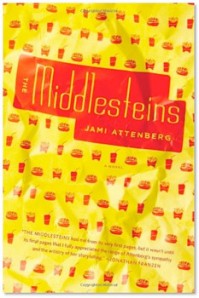 If you’ve followed this blog for any length of time, you’ve probably noticed that I’ve had The Middlesteins in the sidebar under “Currently Listening To” forever.  Or at least for several months.  It’s true that it took me a looooooong time to get through this novel – mainly because, while listening to audiobooks can, theoretically, make “reading” possible virtually anywhere, but especially on the go, the truth is that I don’t really go enough places which would allow for ample opportunity to listen to anything on my iPod for more than five or ten minutes at a time.  My plan at the beginning of the year was to start listening to books when I’m nursing the baby – after all, it seems that I spend half my waking hours in that rocking chair.  But in reality, it’s hard to listen to a book when you have a grabby baby who keeps yanking your earbuds out.  So, I was determined to get back into walking at least a few times a week – exercise and time to listen to books, right?  Well, then I broke my toe a few weeks ago and that plan was foiled, or at least put off.  So I listened to The Middlesteins in fits and starts and it took me approximately four months to get through.

My toe is healed now, in case you’re worried, so this morning I walked for the first time in a long time, and I got through three chapters of my next audio book.  Yay!

But back the The Middlesteins.

Pack, The Breakfast Club and Pretty in Pink fame.  I have found that the reader of an audio book can make or break the experience; Molly Ringwald does a fabulous job with this book, switching voices of the characters, adopting subtle accents – really great.

The Middlesteins is a portrait of a Jewish family in contemporary Chicago.  At the heart of the story is Edie, age 60ish, morbidly obese, and killing herself with food.  The story opens with a five-year old Edie, already big for her age, and her parents expressing their love for her with food.  As the story progresses, Edie gets bigger and bigger, eating herself diabetic to the point of requiring stents in both legs and with a bypass on the horizon – and still she can’t (or won’t) stop eating.  Her husband of nearly forty years, suffocating under the weight of Edie’s addiction, ups and leaves her, shocking the entire family.  What kind of man leaves his sick wife like that?  Lines are drawn in the sand, and everyone takes a side – mostly Edie’s side, since she’s clearly unwell.  Edie’s two grown children, her grandchildren, and her daughter-in-law all rally around Edie, determined to get her well.  Of course there is a sad futility to their noble determination.

Meanwhile, Richard Middlestein has a new, if tentative, lease on life, and enters the mature dating scene, hooking up with a hooker, a divorcee, and finally falling in love with a British widow.  Of course he harbors guilt for leaving Edie, but what was he supposed to do – watch her kill herself and die right along with her?  Nobody seems to understand – they all just see him as heartless and selfish, the asshole who left Edie in her time of need.

The characters are complex, and the chapters are told from varying points of view: from Edie herself, who maintains grit and an optimism about life despite her despairing physical condition; Richard Middlestein, Edie’s estranged husband; Robin, the prickly daughter full of pain; Benny, the worried son; Rachelle, the take-control daughter-in-law; the spoiled twins whose b’nai mitzvah is the centerpiece of the novel; and even the elderly Chinese restaurant owner who falls for Edie.

The Middlesteins takes a hard look at the forces that drive people – especially to self-destruction – with humor and compassion, while showing the complex relationships between family members, and what loyalty means.

I did really enjoy this story, and I’m sure would have enjoyed it more had I stuck with it more consistently.