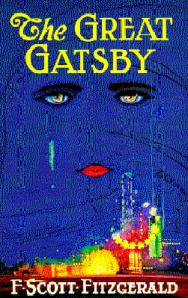 I wish I could say I liked this book, or at least that I appreciated it, because this is one of those books – a classic, one of the Great American Novels – that, I guess, we’re all supposed to enjoy or at least appreciate.  But the truth is, I didn’t much enjoy it or appreciate it.  Which makes me wonder if I’m just missing something – good taste?  An affinity for what is regarded as good literature?  I don’t know.

In any case, The Great Gatsby was F. Scott Fitzgerald’s crowing achievement, apparently.  Fitzgerald is evidently among the ranks of Hemingway, Steinbeck, and Faulkner.  Set in the 1920s, the story is narrated by Nick Carraway who is a sort of supporting character/observer of the story of Jay Gatsby, millionaire, who loves Daisy Buchanan, married to Tom, who is having an affair with one Myrtle Wilson.  Gatsby is a mysterious character; he throws lavish parties at his Long Island mansion, and hundreds of people attend, while guessing in hushed conversations about Gatsby’s shady past.  Daisy once loved Gatsby but married Tom when Gatsby went to war, and now their affair is rekindled.  The love triangle – actually square – culminates in a dramatic and tragic ending.

While Fitzgerald had a gift for prose, I didn’t find any of the characters populating this short novel likable.  Everyone is rich, conceited, unscrupulous, and, despite the world being their oyster, boring.  I could not figure out for the life of me what what so enchanting about Daisy that a young man by the name of Jimmy Gatz would change his name and attain a fortune by illegal means just to impress her and win her over, and I never was able to figure out what was so great about “the great Gatsby” himself.  I thought for a while that maybe I wasn’t enjoying the story because I was listening to an audio version and I didn’t particularly care for the narrator, but then I tried reading the hard copy version of the book and still didn’t care for it.

But at least now I can say I read The Great Gatsby, right?

5 thoughts on “The Great Gatsby by F. Scott Fitzgerald”