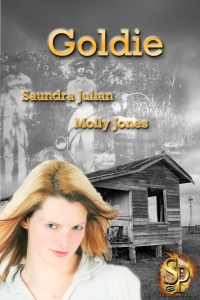 It’s tough to be asked to read and review a book and to come away from it struggling to spin a positive review.  Although I state in my Review Policy that I write honest reviews (keeping in mind that I am NOT a professional reviewer or critic, just someone who loves to read, and reads a lot, and loves to write, and is fairly certain she recognizes good writing from not-so-good; but it all boils down to opinion, doesn’t it?), I’m not out to hurt anyone’s feelings.

Goldie was sent to me by an internet friend who is part of an online book chat group to which I belong.  She is friends with one of the authors of this book, I think, who is also part of the group, which makes it even more difficult to be honest if that honesty might be hurtful.

The premise of this story is a good one: set in Prohibition-era Oklahoma, Goldie is one of three daughters of a bootlegger.  After tragedy hits, she becomes the head of the household and carries on her father’s bootlegging enterprise.

I think this story could have been so much better and gone so much further than it did.  There are numerous problems with it, not the least of which is the fact that it’s so full of misspellings and other errors that it’s difficult to believe that it actually went through a professional editing process (the author confirmed this in an email exchange).  The editing is so poor that I assumed this was another self-published book, and was shocked to learn that it was published by a mid-sized publishing company and went through that publisher’s editing staff.

The story itself is very superficial, and there is virtually no character development; the characters are just plopped down in front of the reader, and we never learn what makes them tick.  This made it very difficult for me to actually care about any of the characters.  None of them seemed real to me, just one-dimensional figures populating a story that jumped conveniently from one event to another with little realistic transitioning.

I also assumed this was a YA novel – that’s what it felt like to me, perhaps because it never delved deep enough to satisfy a reader more sophisticated than a young adult, but the author informed me that it’s not YA, but “women’s fiction.”

There are four customer reviews of this book on Amazon, and they’re all very positive.  This really leaves me scratching my head and wondering if those four customers are friends/family of the authors.  Or perhaps it’s a case of “to each his own.”

Apparently, the authors have a sequel in the works; I wish them luck.

2 thoughts on “Goldie by Saundra Julian and Molly Jones”