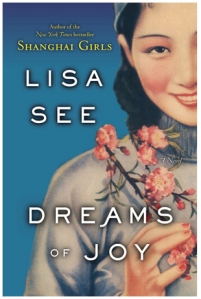 Dreams of Joy by Lisa See

In this sequel to Shanghai Girls, the year is now 1957.  Pearl and May’s daughter Joy becomes the protagonist.  Reeling from the recent suicide of the man she’s always known as her father and the recent discovery that the two people she’s always known as her parents really aren’t her parents, nineteen-year old Joy steals away in the night, leaving everything and everyone she knows in Los Angeles, to go to China to find her birth father.  Full of idealism, Joy is convinced that she can escape the guilt that haunts her by seeking out her Chinese roots and immersing herself in a new life.

Set during the earliest part of Mau’s regime, China’s Great Leap Forward is chronicled – an economic and social campaign launched by China’s communist party aimed at using China’s vast population to transform China into an economic and agricultural powerhouse – which ends in disaster, resulting in catastrophic famine and loss of life. I confess that I knew next to nothing about this period of Chinese history, and this story provided a lot of information.

When Pearl, back in Los Angeles, discovers her adopted daughter’s plan, she is determined to save Joy at any cost.  She makes her way through the Bamboo Curtain and back to her old home in Shanghai, resurrecting long-buried ghosts and attempting, finally, to make peace with her past.

I finished this book a couple weeks ago, and probably would have done better to remember more details had I written my review right away, but I went and had a baby! I also wish I had read this book closer to the time I had read Shanghai Girls, as many details were lost to me in the almost three years since I read it.

Dreams of Joy is a very worthwhile read, and could probably stand on its own, but I would recommend reading or re-reading Shanghai Girls first.