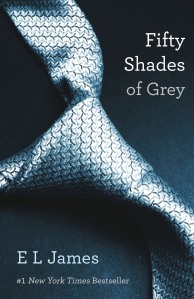 Ahh, where to start?

Erotica, on the other hand, it seems to me, would be steamy and sexy, and even graphic, but hopefully with some kind of semi-believable storyline that invites the observer to care about the characters, and in which the characters are fully developed adults capable of participating in the story voluntarily.

In Fifty Shades of Grey, we meet Anastasia Steele, a young, virginal woman on the brink of graduating from college.  At 21, she’s never even masturbated (yeah, right).  Filling in for her friend who has fallen ill, she agrees to interview one Christian Grey, 27-year old mega-billionaire (self-made . . . yeah, right) for the student newspaper, and from the moment she stumbles into his office, falling flat on her face (literally), the sparks begin to fly between them.  Christian woos Anastasia (if you can call stalking her “wooing”), and it’s not long before he has her in bed, first introducing her to “vanilla sex” to get her virginity out of the way, and then introducing her to his fetishist lifestyle, that of BDSM.

The rest of the book revolves around Christian trying to get Anastasia to sign a contract he has drawn up outlining the parameters of the Dominant/Submissive relationship he wishes to enter into (ahem) with her, which includes her agreeing to be ordered around by him, to eat what he says to eat, wear what he says to wear, to not make eye contact with him, to eagerly and immediately do his sexual bidding, and to allow the use of such implements as whips, riding crops, genital clamps, hot wax, and butt plugs.  (He’s managed to convince 15 or so other women to enter into this agreement before Anastasia, by the way.)  Ana is conflicted, but she’s falling in love with this sick fuck (of course).  Along the way, there are many, many graphic sex scenes.  As in, after Chapter 8 in which their sexual relationship explodes onto the pages (ahem), there might be two or three pages of non-sex between the sex scenes for the rest of the 500+ page book.

I would hate for anyone to think of me as a prude.  I’m cool with a little rough-housing and role-playing in the bedroom (or wherever) between consenting adults.  I take no issues with venturing beyond “vanilla sex.”  But I did not like this book.

Let’s start with the writing.  It’s just not well-written.  There are obvious grammatical errors throughout, and it just has a very amateurish feel to it.  I never even began to give a flying crap about either of the main characters.  Christian is a twisted, arrogant son of a bitch (with a dark, sad past which is only hinted at and which, I surmise, is supposed to make the reader feel sympathetic towards him, but it didn’t work for me), and Anastasia is just a jackass.  There are too many unrealistic things in the story that make it unbelievable: his ultra-rich status at such a young age; and if he’s so rich and successful – a virtual mogul – what the hell is he doing living in Seattle of all places?  And of course all the men in the story are in love with the oblivious Anastasia; and of course Christian has an “impressive” penis, because no average-sized dick would do for a story like this; and he’s multi-orgasmic!  He can not only get it up over and over again, but he can come and come again, within minutes of his last “release”; and then there’s Anastasia’s mother who is a wellspring of relationship wisdom though she’s on her fourth marriage; and the list goes on.

A short list of repeated phrases that made me want to reach into the book and slap the shit out of someone:

Shut the fuck up, you annoying figments of the author’s imagination.

Also, it drove me CRAZY that the author is so clearly British, and yet she wrote through the eyes of a young American woman.  It failed.  It felt like she just read about what Americans might be like, but everyone in the book came off as a transplanted Brit.  Why didn’t she just have the whole thing take place in her native England?

What bothers me most of all about this book – and here’s where I get on my moral soapbox – is the notion that submissiveness is what turns women on.  We’ve spent how many decades fighting to get out from under men’s thumbs, to be seen and valued as equal human beings, but according to this story and the almost unbelievably positive and welcoming reaction to it, what women really want is to be degraded, demeaned, humiliated, and fucked silly by a domineering male.

I’ve been told by several friends that I have to read the second and third books in the trilogy to really understand and get to like the characters.  Frankly, I don’t want to have to try that hard to like characters or a story.  Although I found a couple (out of several dozen) of the sex scenes to be, shall we say, titillating, this book just didn’t work for me, and I won’t be reading the rest of the series.

That said, I am now on a quest to find some quality erotica.  It’s got to be out there, right?  Stay tuned.

Also, my book club will be gathering to discuss Fifty Shades of Grey in July.  Although I didn’t like the book, I expect the discussion to be a rollicking good time, and I’ll post a recap here, so stay tuned for that as well.

13 thoughts on “Fifty Shades of Grey by E.L. James”