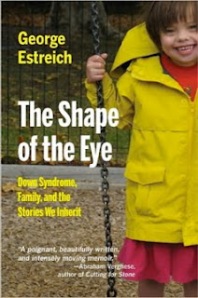 The Shape of the Eye by George Estreich

[Note: This review originally appeared here in August, 2011 in my former book blog, Book Lust.  I’m republishing it here because it’s that important a book; you can also read my interview with the author, George Estreich, here.]

A few weeks ago, in my email inbox was an email from a man I’d never heard of before, asking me if I would be willing to read a book he wrote and recently had published, and to write a review here on Book Lust. I still don’t know how he stumbled upon my book blog, and I was flattered that a bona fide author would think that anything I had to say about a book might actually carry some weight with anyone. Without hesitation, I agreed to read and review his book because I was flattered to be asked, because I like the idea of having any sort of contact with an actual author (being a wannabe writer myself), but mostly because the subject matter of his book is near and dear to me.
I have read numerous memoirs about having a child with Down syndrome. The Shape of the Eye is, hands down, the best one I’ve read. Where Jennifer Graf-Groneberg’s Road Map to Holland was a lifeline to me in the days and weeks immediately following my son Finnian’s birth, diagnosis of Down syndrome, and major surgery as a newborn, soothing me and assuring me that the grief I was feeling was normal and that it would pass in time, The Shape of the Eye examines that grief, without judgment.
Like so many parents of children with Down syndrome, George Estreich and his wife were shocked by their second daughter’s diagnosis soon after her birth, and like so many of us, they found themselves suddenly thrust into the alien territory of raising a child who is different, who is largely, in an abstract way, seen as defective by society. His book, which he spent nearly a decade doing research for and writing, is a personal, heartfelt, often witty, account of raising a child with Down syndrome. More than that, however, it is also a historical account of what has shaped our attitudes about Down syndrome – the truths, half-truths, non-truths, contradictions, and paradoxes. This is a book not only about Down syndrome, but about family, and ethnicity, preconceived notions, and what it means to belong.
Mr. Estreich, a stay-at-home dad and a poet by profession, is an extremely gifted writer. I could not stop turning the pages and throughout the book often felt as if I could easily sit down with him over coffee and shoot the shit about Down syndrome, about parenting, about family, about life.
Five stars. I cannot recommend this book highly enough.

4 thoughts on “The Shape of the Eye by George Estreich”