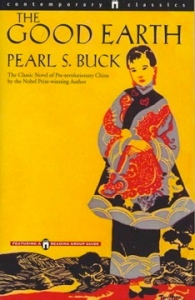 This book has been on my to-read list for quite a while, and I was finally motivated to move it to the top of the list when Kevin announced that it’s been assigned as required reading for his ninth-grade English class.

Originally published in 1931 and awarded the Pulitzer Prize in 1932, this enduring classic was written by an American-born woman who grew up the daughter of missionaries, mostly in China; so although she was not herself Chinese, her knowledge of China and its customs were authentic.

The Good Earth tells the sweeping tale of Wang Lung, a humble peasant farmer in pre-revolutionary China.  When the story opens, Wang Lung is a young man, living alone with his aging father on a meager farm, about to wed a slave girl from the great House of Hwang – a slave being the only sort of wife his station and position affords him.  O-lan is a loyal and dutiful wife who works beside her husband in the fields, bears his children, cares for his house and his elderly father, and stoically and silently makes hard decisions for the well-being of the family, even at great cost to herself.  Covering more than fifty years, the family survives famine, flood, and drought, always coming back to the land as the one thing that will never cease to be.

Obviously, as the title describes, “the good earth” is the main thread that runs throughout the story.  A man who can acquire land becomes prosperous (as Wang Lung does); in times of hardship the land may temporarily fail, but it will always come back; all good things come from the earth: sustenance in the form of what can be reaped from the land, prosperity in the form of profits from the harvests that can be sold, as well as status and respect in the community for one’s land holdings, and in the end, the earth is where a man returns in death.

The book has some very adult themes: marriage and subservience, drug addiction, violence, reproduction and childbearing, and most notably, lust.  Lust for land, lust for money, and sexual lust for the sake of its own pleasures.  These themes are mostly allusions and not graphically depicted, but still clear.  I am a little surprised that this book has been assigned to a ninth-grade English class, as some of the subject matter may be a little too mature for some kids in that age group.  Not that I object to Kevin’s reading it, but I do think it warrants discussion with him, and I am very curious as to how the material will be handled as a class assignment: what types of discussions will the class have, what themes will the students be asked to explore and write about?

The story ends more than fifty years after it starts: Wang Lung has borne children and grandchildren, he has buried loved ones, acquired hundreds of acres of land as well as the great House of Hwang, he has taken on young wives to satisfy his lust, and he has become a rich and well-respected man – a far cry from the peasant farmer he started out as.  But what of happiness and peace?  And has he succeeded in passing on his love for the land on to his sons?

I really enjoyed reading this.  The lilting, almost poetic prose was very pleasing, and the story itself extremely satisfying.