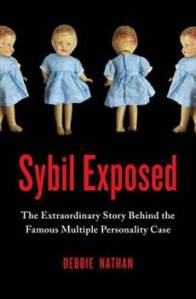 You can’t have grown up in the U.S. in the 1970s without having heard of Sybil.  The name has become synonymous with “split personality” or “multiple personalities,” a psychiatric craze that swept the nation over a period of more than two decades, spawned in large part by the best-selling book, TV miniseries starring Sally Field and Joanne Woodward, and the efforts of a Dr. Cornelia Wilbur.  I very much remember not being allowed to watch Sybil when it was shown on television, and I remember reading the book in my early adulthood and being morbidly fascinated, much like the rest of the book’s readers.

Who was the real Sybil, though?  Debbie Nathan, a journalist who has devoted much of her career to covering and debunking child sex abuse panics and “recovered memory syndrome,” introduces us to the real Sybil – a girl named Shirley Mason who was born to Seventh Day Adventist parents in 1923 in a small town in Minnesota, an only child who dreamed up fantasy lives for her dolls and imaginary friends for herself; a girl who was shy and nervous and who over time began to exhibit physical and emotional ailments that were chalked up to anemia and “hysteria,” a popular umbrella diagnosis of the time describing general discontent in females.

An adult Shirley meets Dr. Connie Wilbur, an ambitious psychiatrist determined to make a name for herself.  Something draws the two together into what becomes a severely codependent relationship.  Dr. Wilbur needs Shirley to feed her God-complex, and because she’s the perfect, suggestible subject whom Dr. Wilbur can model into a patient that will make Dr. Wilbur a star in the medical/psychiatric community.  Beginning with a platform of “hysteria” as Shirley’s diagnosis, Dr. Wilbur plies Shirley with drugs, hypnosis, and electro-shock treatments, violating numerous ethical standards along the way, determined to uncover supposed long-buried memories of horrific childhood abuse, all the while encouraging Shirley to come up with alternate personalities.  Shirley, craving the motherly attention she gets from Dr. Wilbur, languishes on Dr. Wilbur’s psychoanalysis couch for eleven years, becoming drug addicted, and completely emotionally and financially dependent on her doctor.  At one point she writes Dr. Wilber a lengthy letter telling her that none of the “alter personalities” she has exhibited are real, that her mother never abused her in the manner her so-called repressed memories have brought forth, and that she would like to continue her therapy in an honest manner.  Dr. Wilbur refuses, taking this as merely denial on the part of someone who is clearly a victim and unable to make sound judgments.  Realizing that the only way she can continue her relationship with Dr. Wilbur is to go along with the farce, Shirley complies.

Flora Schreiber is an ambitious writer who, like Dr. Wilbur, wants to make a name for herself.  Eventually she is commissioned by Dr. Wilbur to write a book about Shirley’s case.  The book is several years in the making, during which time Ms. Schreiber has many reservations about the “facts” set before her for this “non-fiction” project, and at one point almost scraps the entire project.  When the book finally hits bookshelves in 1973, it becomes an instant best-seller, eventually spawning a television miniseries and spate of diagnoses of Multiple Personality Disorder, or MPD.  The three women achieve fame and a measure of fortune, although Shirley spends the rest of her life as a recluse, desperate that nobody find out she is the real Sybil.  Dr. Wilbur is lauded for her contribution to modern psychiatry and MPD makes it into the Psychiatry Journal as an official diagnosis.

Eventually many of the claims in the book begin to be questioned; nobody who knew Shirley and her family in that small town in Minnesota ever witnessed anything untoward, there was never any evidence of abuse, and in fact, many of the memories Shirley “recovered” could not possibly have taken place.  It is also eventually accepted that the drugs used by Dr. Wilbur to treat Shirley (somewhat standard practice for the time) did not uncover repressed memories, but rather fantasies and hallucinations.

I read it on my iPad and noticed a number of typos, which irritated me (poor editing reflects on a book’s credibility, fairly or unfairly), and I don’t know if the electronic version differs at all from the paper version.  All in all, I thought the book was well-written and by turns fascinating and horrifying.  It’s extremely disturbing to realize how easily people can be duped and manipulated by those in positions of authority, and how an entire society can so gullibly gobble up diagnoses that have no scientific, forensic, or factual basis.